What Would You Invent To Stop Time? 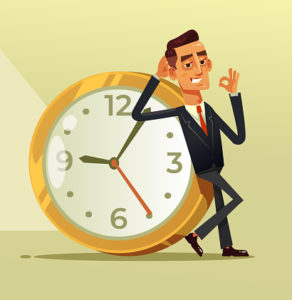 Do you wish you knew more tech tricks to help you make your gadgets work smarter for you and save you time? See how to use your iPad as a second laptop screen, how to set time limits for using a Chrome browser, how to schedule an email to send at a certain time in Gmail, and more!

Obviously, we’ve come a long way since stone weapons and fire, all the way to robotics and artificial intelligence, and then some – though we’re still waiting for the day when we all have flying cars like the Jetsons. Think about the ways you use technology every day. Do you listen to music in the car, on the bus or train, or while jogging? Do you brew coffee or tea in a Keurig? Are you reading this on a computer or mobile device? Do you use an alarm clock?!

We take tech for granted. It’s just. . . there. Think back to when the remote control became mainstream, and how that one chunky plastic box – the “clicker” – not only changed the world but revolutionized households. No longer did kids fight over whose turn it was to get up and change the channel. The first vehicle keyfob is widely considered to be introduced by the French in 1982 for the Renault Fuego just after Ford debuted the keyless entry system – by keypad – in 1980. Not only do the vast majority of passenger cars come standard with remote keyless entry devices now, but more are being equipped with push-button start capabilities – or even remote-controlled start-up, from the comfort of inside your home, office, or from a distance on a very hot or cold day.

Now that we’ve got you thinking about how you use technology each day, shift your thoughts to how you can “up your game”. You’re barely scratching the surface of what your tech can do for you.

Are you in the camp that never has enough screen space? A few dozen tabs open in your web browser window, email, plus a few documents and spreadsheets for work clutter your screen space – and make your computer run slower. And if you’re on a laptop, you have even less screen real estate to start with! But what if you could use your iPad as a second screen for your laptop?

You can! Don’t believe us? Try downloading the Duet Display app and voila! Connect your iPad to your laptop using the sync/charging cable, and you’re all set.

Now this one is a doozy! Did you know your smartphone can work like a scanner? No, we don’t mean by taking one picture of a document. There are free apps out there, like Adobe Scan or Evernote Scannable, that allow you to turn your smartphone into a scanner to scan documents like forms, receipts, business cards, and more by using the camera on your phone.

And sometimes it’s downright creepy. But this handy little helper is pretty cool! There is an extension for Google’s Chrome browser, called StayFocusd, that allows you to set a time to let your mind wander and get lost in the darkest corners of the Internet – or at least surf aimlessly for a pre-set interval. The default setting is 10 minutes, but you can change this depending on your needs. Once your mental break is over, Chrome basically locks you out and disables access forcing you to resume being productive.

You know the email message you want to type, but now isn’t the right time to send it. Email marketing platforms are great for this type of structured send, but the focus of these solutions is to send to email lists rather than from a single sender to a single recipient. There is an add-on for Gmail called Boomerang that facilitates scheduled sending for email.

After reading this, it’s the understatement of the year to say that the sun is a good source of power…but it’s literally a great source of solar power. The SolPro Charger can soak up the sun’s rays and fully charge a smartphone with 90 minutes of exposure. Bonus: the charger can send power to your smartphone battery even as the SolPro is itself absorbing solar power.

Or would you – and here’s the genius move – use those powers to invent a device that could do all of this for you using the most advanced technology available, and make your own life easier? I think we know the answer.