Everyone has Wi-Fi. We all expect to see it wherever we go, and most of us have more than one Wi-Fi-enabled device. Grocery stores, fast food restaurants – even your mechanic has Wi-Fi. But does that mean you REALLY need it in your school? Isn’t it less secure than wired? 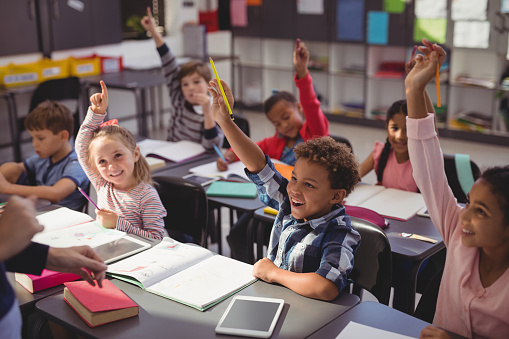 To answer the first question: “Don’t be coy.” You know how backward wired-only connections look. You’re either a Luddite or unbelievably cheap trying to avoid the expense and work of building a new network. You are now out of time. The government itself says you need Wi-Fi, and in this 2017 report plainly states that a reliable, fast wireless connection is a necessity on par with other utilities such as gas, electricity, or water.

As to the second question: Well, no. Not so much anymore. With advances in encryption, Wi-Fi networks that are properly safeguarded offer security comparable to that of wired set-ups. If you still prefer to use wired internet for select devices, such as a handful of desktops and a designated copier/printer/fax machine, you can enjoy the advantages of a wireless network. Wired is a bit faster and more reliable than Wi-Fi, but this is more because of how easy it is to ensure that only a handful of users are on that hard-wired data line. Employees must literally be plugged into a wired network, so there is no issue of people overloading it by all signing on and demanding bandwidth at once.

So the advantages of wired over wireless can really be solved by properly planning out the wireless network. From there, advantage is all wireless: portability, ease-of-use, and, if you plan for it, scalability.

Why use a scalable wireless network?

Setting up a scalable wireless network means looking at the present with an eye to the future. You know that you’ll potentially have more students or employees, or even more devices per person, or more demanding apps. If you’ve built scalability into the network in the first place, you’ll easily adapt to the increased demand on your connectivity. Re-wiring not only costs money, it’s disruptive. Contractors can come out when school is not in session, but off-hour calls often cost more. To do everything more or less at once, having access points ready for later expansion allows for a nearly seamless expansion when it becomes necessary.

Adding people in will not be a matter of climbing around above the ceiling tiles, drilling holes in walls, but just a matter of entering a new user and password and updating the server. Oftentimes, it won’t even cost anything to do it.

Factoring in the potential for future expansion will pay off in the long run when the entire network doesn’t require a re-design within a couple of years. By planning for scalability, using multi-purpose devices that can handle increased connectivity and streaming demands, you are ensuring that the initial investment pays off. The more manageable maintenance budget will be easier to get approved, and you can plan for a complete overhaul when it becomes truly necessary, rather than prematurely, due to an initial refusal to plan for growth.

Smartphones have risen in popularity at a pace that’s nearly alarming for its potential ramifications. In fact, the amount of active mobile phone subscriptions in the US is 349.9 million – more than the total US population of 325.3 million. These consumers are using their phones for far more than phones. They’re on apps that often require data usage, which allows for less memory and storage use on their phones. Even apps that do not apparently require internet connection often do for this reason. People have grown to rely on their phones as a connection to their families, coworkers, and also as a means of keeping themselves organized, of keeping their emotional well-being up through habit-changing apps, diaries, and more.

As the mobile devices, we use speed towards true ubiquity, it will not do to simply watch as the tide rises. Plan for the eventuality of increasing connectivity needs by designing a scalable wireless network. This direction offers better services for the future, along with lower overall budgetary requirements. It removes some of the stress of growing. All school administrators understand the need to reduce stress and lower the budget.